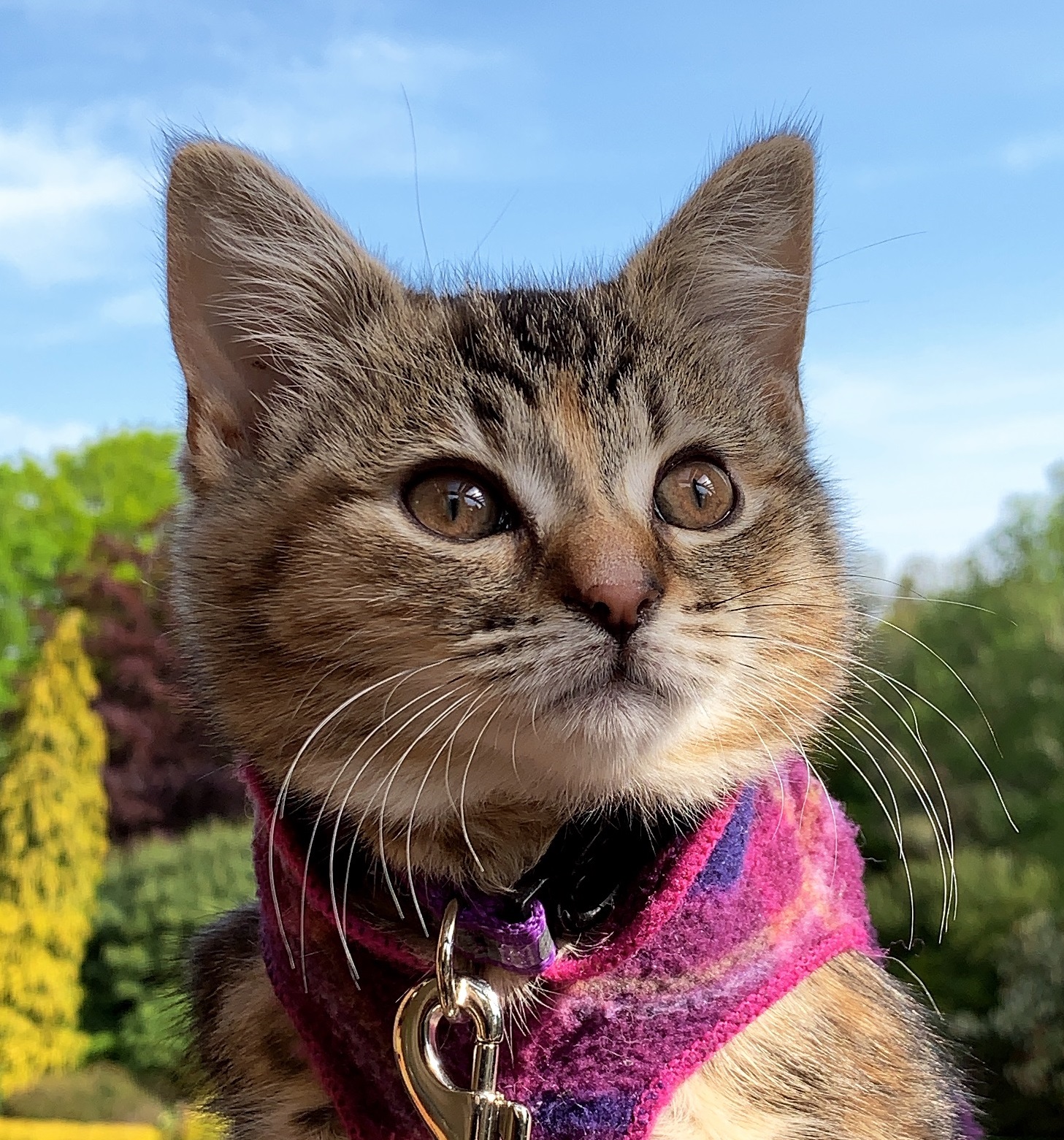 One of Penrose Care’s colleagues is a cat, Quita the Kitty, born in January 2019 and acquired by Penrose Care in March 2019. Quita is an office cat and emotional support animal at Penrose Care; adventure cat in her free time; and also works as a pet model with Pet London Models. Quita is London’s #1 Insta cat according to TimeOut London magazine. Notably, Quita has been blessed by Pope Francis and Pet by Prince Charles – she is a saintly and royal little kitty! In January 2022, Princess Quita entered the Web 3.0 space by registering the quitathekitty.eth and quita.pcc.eth domain names with ENS Domains and getting involved with the HolyVerse NFT project that aims combat the poverty trap by teaching financial literacy to at-risk youth in the Chicago and New York areas. Quita is also a big fan of feline-inspired NFT project  Purrnelope’s Country Club.

In August 2019, Quita appeared in DJ Regard‘s hit “Ride It” song official Fan Lyric Video. A TikTok video of Quita traveling around Europe to DJ Regard’s “Ride It” song hit 1 million views on February 19, 2020 and on February 21, 2020, Quita met DJ Regard in person and they created a TikTok together! On February 26, 2020, viral meme Instagram size Memezar posted Quita’s viral Europe travel video, amassing over 2.1 million views as of March 2, 2020.

Quita has appeared on the Instagram feeds of Regent Street W1, Gold Paw Series pet clothing, CatConWorldwide, Printimals, the Scottish Parliament and the Thames Clippers. On November 14, 2019, Quita was in a photo shoot with Teddy Knight the Cockatoo for the Ice Bar London. On November 29, 2019, Quita was in a photo shoot for pet insurance company Bought By Many for their Christmas 2019 marketing campaign. On December 10, 2019, PetLondon Models sought out Quita and signed her up for their animal agency as well. On December 16, 2019, Quita was photographed by celebrity dog photographer Ursula Daphne Aitchison for pet insurer Waggel. Quita and her colleague Coco Lee the parrot, were filmed in Henley-on-Thames on November 2, 2020 for a pet food commercial – an engagement arranged by PetLondon Models. In 2021, Quita did modelling work for Pets and Home, Made.com and Edgard & Cooper.

Although Quita is based in Penrose Care HQ in Belsize Village, she loves to adventure! Quita the Kitty has already visited all eight of London’s Royal Parks, the first cat to ride on one of the Thames Clipper boats, and has even travelled to France, Italy, Vatican City, Austria and Germany.

Quita’s primary role is to help those who feel down feel happy. She practices in public and to venues that invite her. Quita has already provided therapy services to two persons with cerebral palsy and morale boosting to a variety of places as well as providing therapy services as a special guest at the opening of Cafe Conversations on the Thames Clipper in October 2019. In January 2020, Quita helped a child with autism get an autograph from actor Kit Harington by befriending the head of security at a film set for the November 2020 Marvel film “The Eternals”.

Coco Lee and I were honoured indeed to celebrate Ms Great Britain 2020 April Banbury’s birthday last night at Calici in Belsize Village! Congratulations April and happy birthday! Wishing you many blessings in the year and years ahead! 🥳👑👑👑❤️🐈❤️👑👑👑

I was very honoured today to meet the incredible @djregardofficial, the man behind the remake of @jaysean’s “Ride It” which is behind my viral travel TikTok (@tiktok_uk) which reached 1 million views a few days ago on February 19, 2020. I wish you continued success DJ Regard and safe travels for the rest of your tour and back home. Keep spreading love! 🔥 🎉❤️👑🐈 #regard #djregard #rideit

We were not allowed to take photos of the time Kit Harington pet Quita but here is the story behind it.

On January 18, 2020, Marvel Studios filmed a segment of their new film, “The Eternals”, in Quita’s neighbourhood, Belsize Village.

One of PenroseCare’s clients who is a child with autism spent the whole morning trying to get Kit Harington’s autograph. Our CEO Robert Stephenson-Padron personally approached
Disney Studios’ head of security on the film set to petition the child’s case. This was only possible because Quita had befriended the head of security earlier in the day.

Three hours later one of the site directors came by to tell the kid that Kit Harington was going to come to give him an autograph. He did and seeing the joy in the kid’s eyes was one of the happiest moments of my life. Kit also pet Quita but we couldn’t take photos. Good people! Very good people indeed!

I was honoured indeed to meet director Chloé Zhao on the film set of The Eternals. Everyone at @disneystudios, @marvelstudios and @pinewoodstudios are so kind and wonderful. I wish you great success and many blessings! #marvel #theeternals #chloezhao #disney

Quita works at an elderly care company but models on the side to fund her high-end life style of fancy food and foreign trips. Here she is being photographed by Ursula Daphne Aitchison, well known British *dog* photographer but Quita feels she is superior to those other animals. from Catswithjobs

“I cannot lead you into battle. I do not give you laws or administer justice but I can do something else – I can give my heart and my devotion to these old islands and to all the peoples of our brotherhood of nations.” – HM Queen Elizabeth II 👑❤️🐈⁣ ⁣ ⁣ ⁣ ⁣ ⁣ #therapycat #pettherapy #therapypet #petsastherapy #penrosecare #pet #cuddles #pets #petsofinstagram #britishroyalfamily #princecharles #princeofwales #royalvisit #catsofinstagram #meowed #buzzfeedanimals #clarencehouse #royalfamily #britishroyals #brishroyalfamily #celebrity #celebrities #aww #cute #cutecat #cutenessoverload #royal

Very honoured to meet fellow royalty HRH The Prince of Wales and The Duchess of Cornwall at the 20th anniversary celebration of the London Farmers Market at Swiss Cottage. We actually both attended the Newman Canonisation at Vatican City in October 2019 but did not meet there. 👑❤️🐈⁣ | @clarencehouse @londonfarmers ⁣⁣ ⁣ “In the age when he lived, Newman stood for the life of the spirit against the forces that would debase human dignity and human destiny. In the age in which he attains sainthood, his example is needed more than ever – for the manner in which, at his best, he could advocate without accusation, could disagree without disrespect and, perhaps most of all, could see differences as places of encounter rather than exclusion.” – HRH Prince Charles⁣⁣ ⁣⁣ #swisscottage #nw3 #swisscottagefarmersmarket #londonfarmersmarkets #LFM20 #london #celebration #instaphoto #johnhenrynewman #PrinceofWales #DuchessofCornwall #RoyalVisit #cat #cats #royalcat #therapycat #quitathekitty #princecharles #penrosecare #instacat⁣ ⁣ Photo by @penrosecare manager @olgaggomez90

Therapy Sessions (as a trainee)

For World Mental Health Day 2019, Quita, a therapy cat trainee, helped open the new Café Conversations on the Thames Clipper as a special guest to help combat loneliness in London, UK from Catswithjobs