The 2018 Living Wage Champion Awards celebrate individuals and organisations that have made an outstanding contribution to the Living Wage movement, and are proudly sponsored by Aviva, KPMG and the City of London Corporation.

In 2012 Penrose Care became one of the first four Living Wage accredited care homes. In an industry that has often struggled with low pay, Penrose Care used the real Living Wage as the foundation on which to roll out further outstanding labour standards; including guaranteed weekly hours, payment for travel time, private medical insurance and an occupational sick-pay scheme. These standards have set Penrose apart from its peers, and highlighted the possibility of decent pay and conditions within the care sector.

One of three winners of the Industry Leadership Award, including The Haven Wolverhampton and Unlimited Potential, Penrose Care were commended for their promotion of the Living Wage. Other shortlisted organisations included Curzon Cinemas and Creature.

“Since our founding, Penrose Care has been the UK’s pioneer of the ethical provision of home care. The real Living Wage has been the cornerstone of our ethical framework as it is one of the most credible signs to all our stakeholders that Penrose Care is a genuinely caring organisation that respects the dignity of the human person – client, worker, or any other. We are greatly humbled in receiving the Industry Leadership Award from the Living Wage Foundation. The Living Wage Champion Award will further Penrose Care’s confidence in leading a caring organisation which engenders trust and honesty, two of the qualities needed to provide excellent care consistently.” 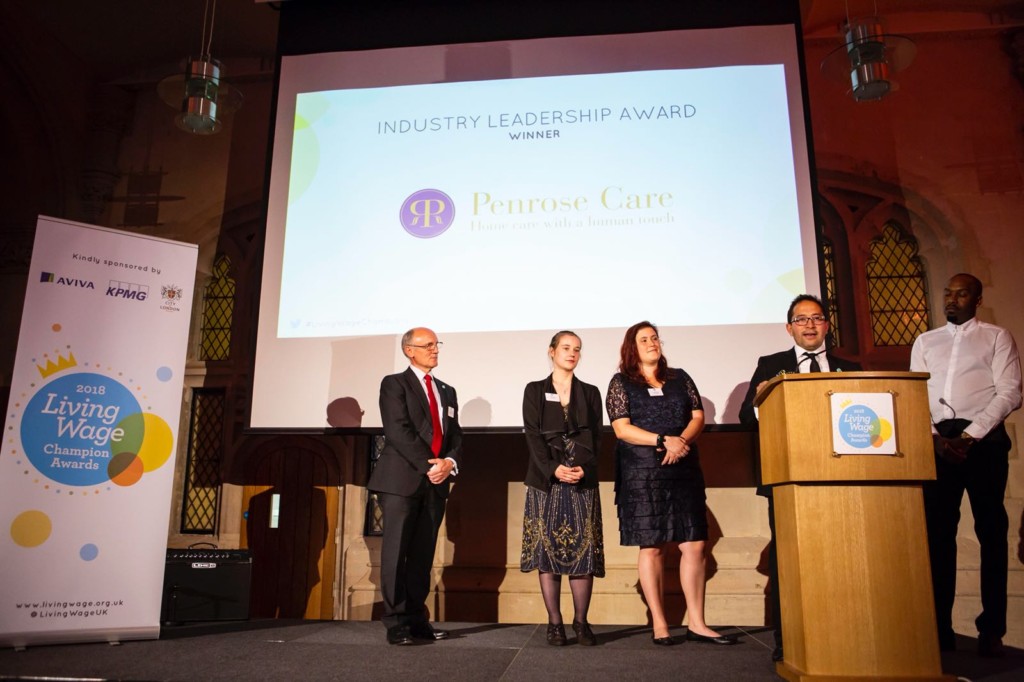 Olga García Gómez, who started at Penrose Care in 2014 as a support worker and now is a deputy manager, said:

“I am grateful to be part of Penrose Care, a company that takes great care of their staff and clients. The company feels more like a family and whereby you always feel supported due to a variety of ethical working conditions including the London Living Wage, and having available a manager 24/7. In addition to all this, you can develop your professional career at Penrose Care as I have. For someone coming from abroad, all these factors are very important in a job.” 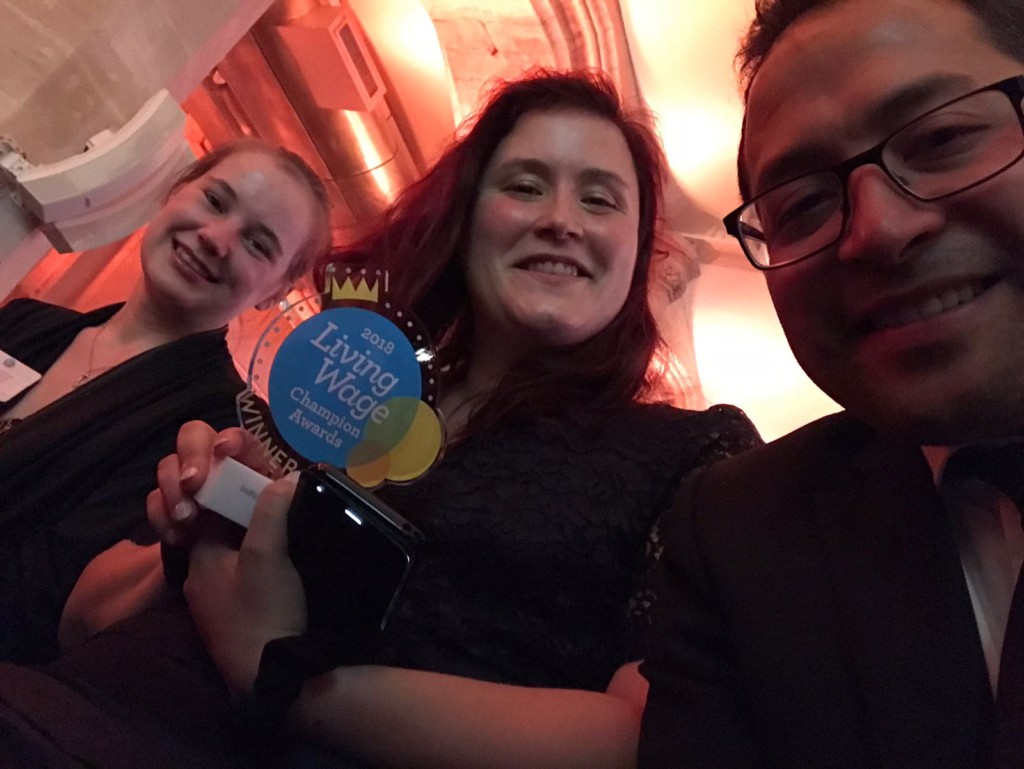 “Congratulations to Penrose Care on becoming a Living Wage Champion award winner. Employers like Penrose Care are leading the way in placing dignity and respect at the heart of their organisation. Over 4,200 employers have now signed up to the movement, and their leadership is making a profound difference to the lives of families and communities across the UK. Penrose Care’s work in celebrating and championing the Living Wage has been vital to its success.”

The Living Wage is an hourly pay rate set independently, updated annually, and calculated according to the basic cost of living. Employers choose to pay the Living Wage on a voluntary basis.

The awards were judged by an independent panel of business and community leaders. 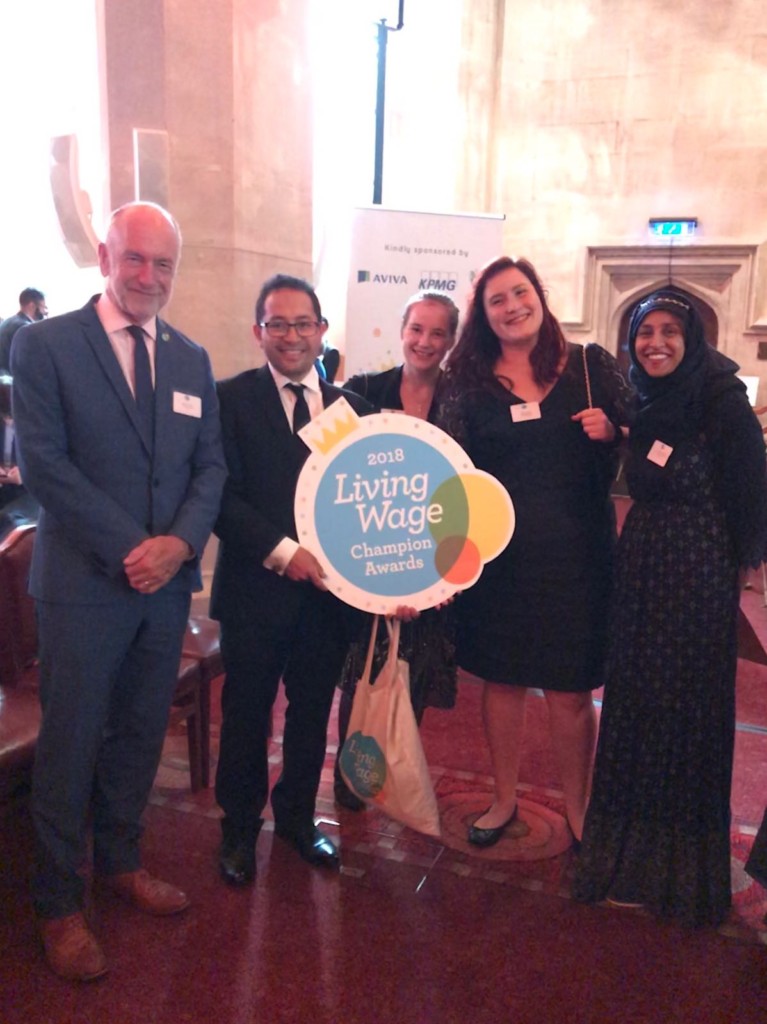 The real Living Wage is the only rate calculated according to what people need to make ends meet. It provides a voluntary benchmark for employers that choose to take a stand by ensuring their staff earn a wage that meets the costs and pressures they face in their everyday lives.

The UK Living Wage is currently £8.75 per hour. There is a separate London Living Wage rate of £10.20 per hour to reflect the higher costs of transport, childcare and housing in the capital. These figures are calculated annually by the Resolution Foundation and overseen by the Living Wage Commission, based on the best available evidence on living standards in London and the UK.

The Living Wage Foundation is the organisation at the heart of the movement of businesses, organisations and individuals who campaign for the simple idea that a hard day’s work deserves a fair day’s pay. We recognise and celebrate the leadership shown by responsible employers who voluntarily choose to go further and pay a real Living Wage based on the cost of living, not just the government minimum. There are currently over 4,200 accredited employers.

What’s the difference between the real Living Wage and the Government’s national living wage?

In April 2016 the government introduced a higher minimum wage rate for all staff over 25 years of age inspired by the Living Wage campaign – even calling it the ‘national living wage’.

However, the government’s ‘national living wage’ is not calculated according to what employees and their families need to live. Instead, it is based on a target to reach 60% of median earnings by 2020. Under current forecasts this means a rise to less than £9 per hour by 2020. For under 25s, the minimum wage rates also take into account affordability for employers.

The real Living Wage rates are higher because they are independently-calculated based on what people need to get by. That’s why the Living Wage Foundation encourages all employers that can afford to do so to ensure their employees earn a wage that meets the costs of living, not just the government minimum.

The judges for the 2018 Living Wage Champion Awards were: 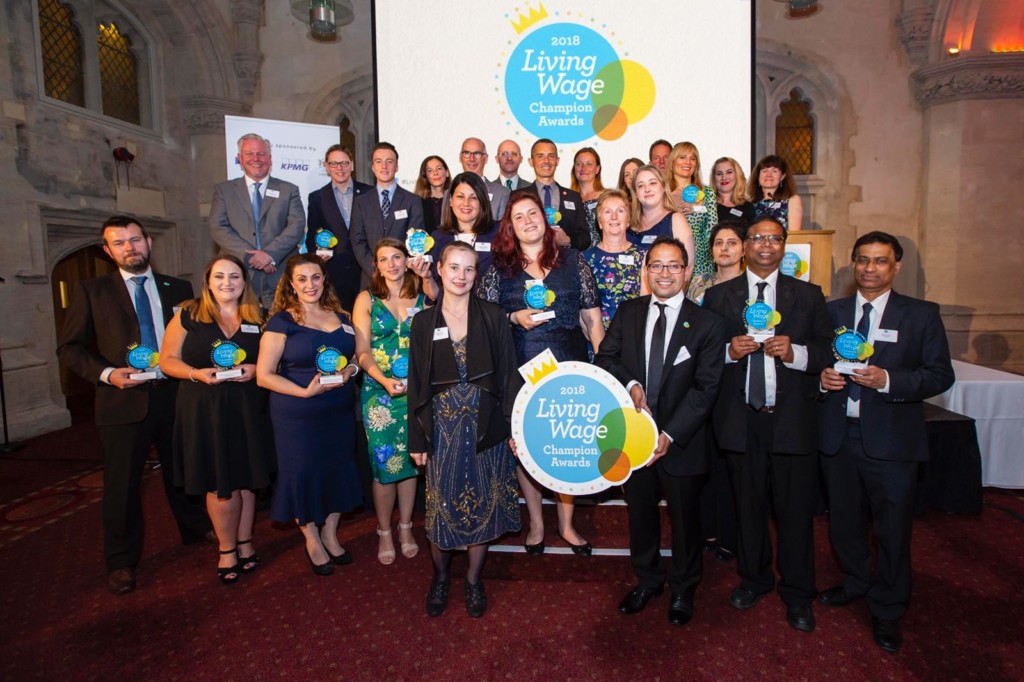 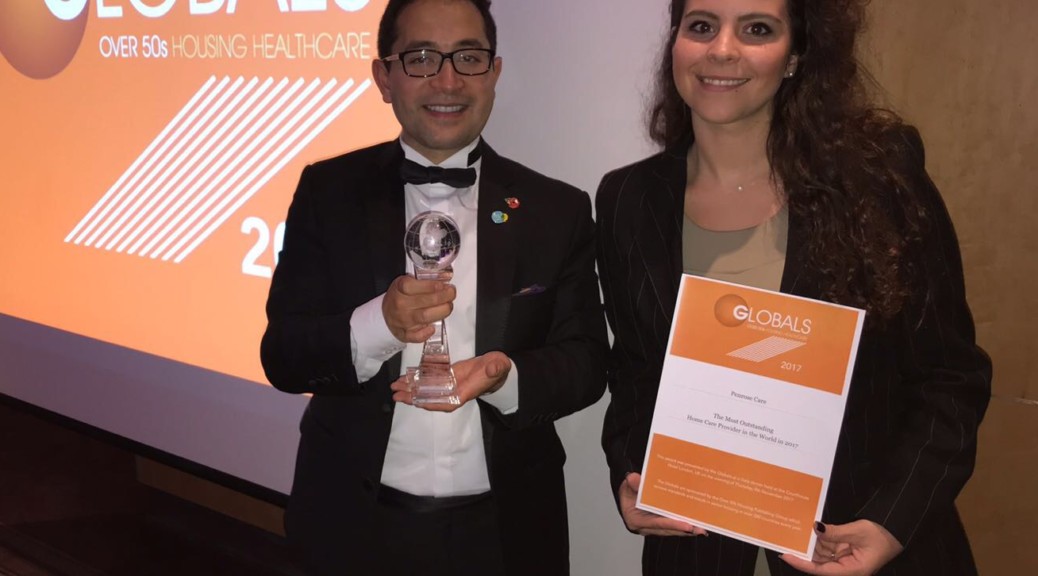 Belsize Village, London, UK: Penrose Care was honoured Thursday night, November 9, 2017 to receive international recognition for its pioneering work in integrating ethical labour practices into home care at the 2017 Global Over 50s Housing Awards. Penrose Care was recognised as the “The Most Outstanding Homecare Provider in the World.” 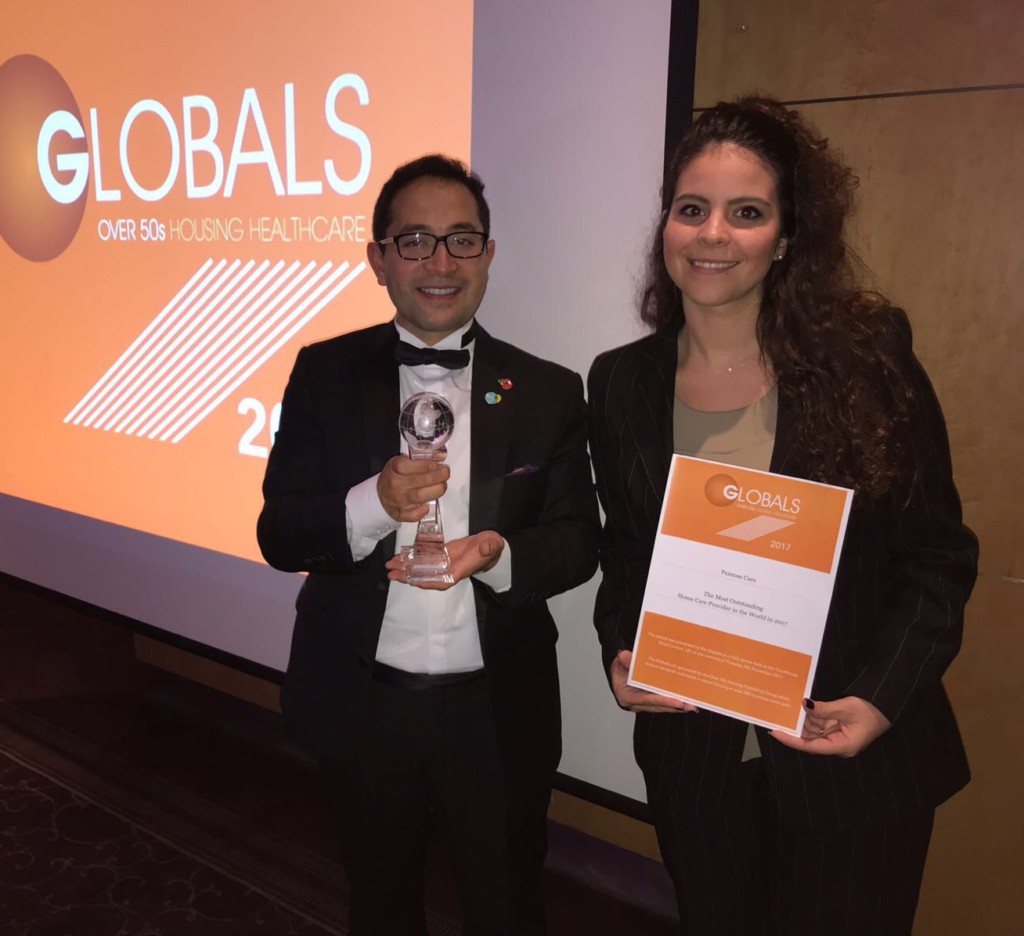 Social care labour practices tend to be poor both in the UK and abroad and Penrose Care has over the years received research delegations from Canada and Japan to learn about Penrose Care’s ethical labour practices, how Penrose Care makes them possible financially, and how it leads to better social care outcomes. Penrose Care has been involved in various labour and social care reports and studies including from the University of Strathclyde (Scotland), Itami City Council (Japan), the Equality & Human Rights Commission (UK) and most recently, The New Policy Institute.

Penrose Care’s ethical workplace practices include paying the London Living Wage, a voluntary wage rate set by the Mayor of London once a year which is meant to be the lowest a person can be paid to still live a decently quality of life in London (currently £10.20/hour vs the mandatory National Living Wage of £7.50/hour); an Occupational Sickpay Scheme that allows workers to receive full pay for up to 10 days a year so workers do not feel compelled to work go to work when sick – supporting public health; free taxis home for workers going home late at night to help ensure their safety and give them that extra boost of relaxation; and a variety of other labour initiatives.

Long-time international labour specialist, Jerald Zellhoefer, a former American social worker and European Representative of the AFL-CIO based in Paris, France and member of the International Labour Organisation from 1991-2010 noted upon learning of Penrose Care’s award, “Penrose Care is a strong supporter of Living Wage which in the social care sector in a country with an aging population is especially important.  Dignity for patients and care givers can never be secondary issues.”

Following receiving the award, Penrose Care managing director said, “The Penrose Care team is once again honoured and humbled to be recognised for our especially caring ethos, which covers both our staff and the vulnerable persons we support to live independently in their homes.”

Mr. Stephenson-Padron continued: “Penrose Care’s core innovation is an adherence to a timeless truth – that the dignity of man and woman is superior to all other aims. With these guiding values, we have been able to attract and keep special individuals with a vocation to care. And by allowing them to pursue that vocation, we have been able to help the elderly and disabled persons we support live more fulfilling lives.”

Nikoletta Makouli, a senior care worker at Penrose Care who attended the awards ceremony in London at the Courthouse Hotel, said following the award: “We are not only a team because we work together, we are a team because we respect, trust and care about each other. Proud to be part of this company Penrose Care.”

Various other countries were represented at the awards ceremony including organisations from Australia, Canada, India, Italy, Mexico, Thailand and the USA. 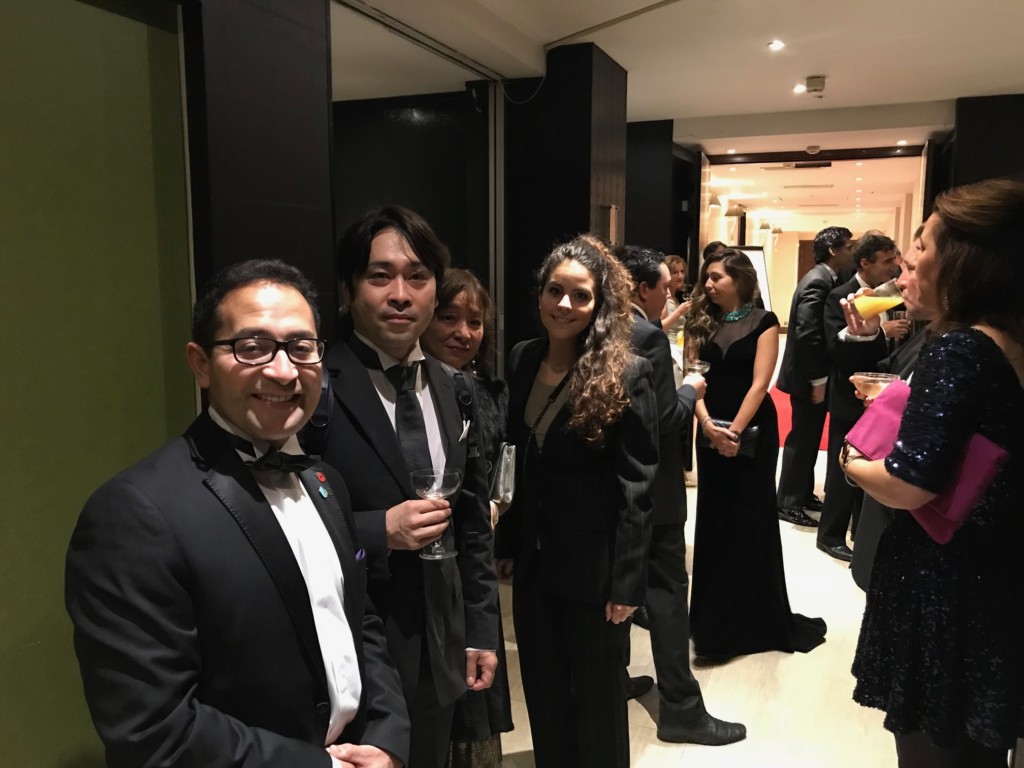 With Penrose Care having a multi-year relationship with healthcare researchers from Japan, Penrose Care’s team was especially pleased to meet at the Global Awards ceremony Dr. Hanatsu Nagano who has invented a shoe insole that reduces trips and falls in the elderly.

About the Global Over 50s Housing Awards

The Global Over 50s Housing Awards (“Global Awards”) are now in their seventh year. They were created to celebrate and reward the best individual and company performances in Seniors Housing/Care Trends, Healthcare Innovation, IT, and Medical Tourism sectors worldwide. The Awards recognise the rapid growth of these sectors worldwide, and the capacity of individuals to influence and set new performance standards across countries, regions and the world. The Awards focus on elevated performance; the creation of new business models; contrarian thinking; recognising and embracing new trends; market leadership; inspirational performance and the elevation of customer experience.