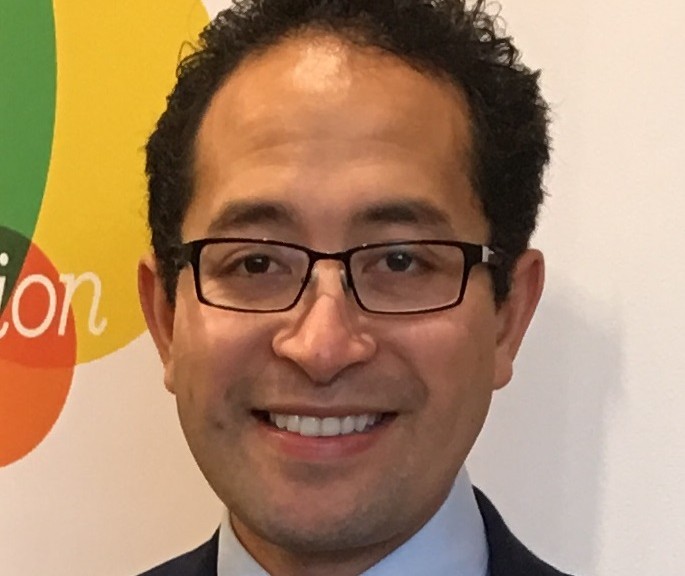 “Wherever we look, politically, religiously, economically, environmentally, there is insecurity and instability. It is not too much to say that the future of the West and the unique form of freedom it has pioneered for the past four centuries is altogether at risk.” (1)

Indeed, there is an air of cynicism in the West today. I can feel it. I expect you can feel it as well. Fortunately, as in other periods of human history, there is a glimmer of hope that rejects this cynicism: the modern Living Wage movement born out of East London in 2001 by Citizens UK. 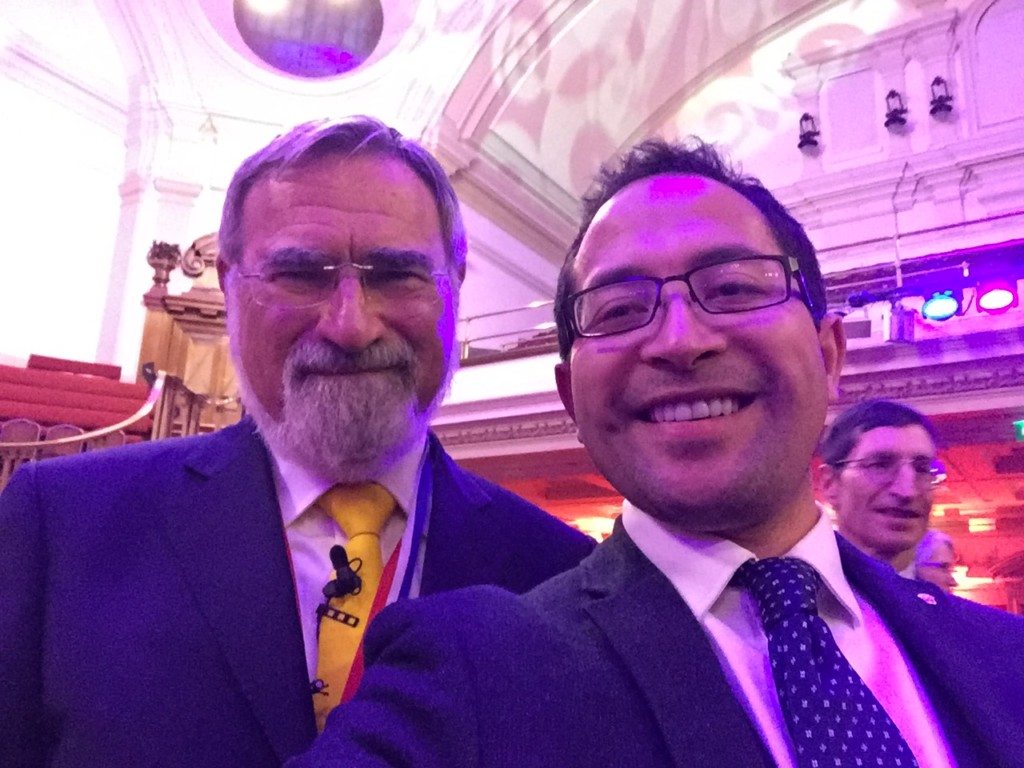 Penrose Care managing director Robert Stephenson-Padron with Rabbi Lord Jonathan Sacks after he received the 2016 Templeton Prize on May 26, 2016.

It’s important to first look at the personal attraction to outsourcing moral responsibility since much of the pathologies that appear in society as a whole or in our workplaces specifically start within each one of us. Tribalism and nativism stem from a universal vice – that of a tendency to reject the dignity of “other” human beings out of selfishness. This tendency is amplified with feelings of insecurity.

If you harm an innocent person however, the goodness within you also has a say – you are likely to feel bad about it afterwards. It appears as guilt and that type of stress that keeps you from sleeping well at night. It nags at you, it tells you, “maybe you’re doing wrong.” “Maybe you shouldn’t be doing this.”

We humans don’t like feeling guilty, but we are also aghast to the idea of anyone telling us what to do – and that goes for our inner conscience. Therefore, by dissociating certain human beings from their innate dignity, by reducing them to some category of otherness, we move to a system whereby we may violate the dignity of human beings while minimising our guilt in our progress towards whatever lofty goal we may have: say purely maximising profits or minimising costs without reference to any value system.

With guilt restrained, human selfishness metastasises into an epidemic of exploitation. Polish philosopher Leszek Kolakowski believed that “sensitivity to evil” is indeed “the only system of reference that allows us to contemplate [the] price [paid for ‘progress’] and forces us to ask whether it is exorbitant.” (2) To violate the dignity of another person is evil and by blurring our associated guilt behind different man-made curtains, we lose our sense of evil.

In the UK, we see the results of minimising costs without reference to human dignity starkly demonstrated in the ailing home care sector – where years of Local Councils tendering out home care services for the elderly and disabled persons to the lowest bidders without reference to minimum legal labour standards resulted in a sector of contract winners that widely pay their care workers below the minimum wage, rush them from 15 minute home visit to 15 minute home visit, and call them in and out of work like machines in a warehouse. With home care workers working behind the curtains of these contract holders, Local Councils turned a blind eye to years of labour exploitation.

The case of the UK home care sector has also shown that maximising profits or minimising costs without reference to human dignity is not sustainable. As Herbert Stein’s Law counsels us, “If something cannot go on forever, it will stop.”

In the years following the British tax office’s justified step-up of enforcement of the National Minimum Wage in 2014, three of the UK’s top five operators in the home care sector exited the market. In January 2018, home care workers in Birmingham went on strike over continued austerity of the city’s social care budget which has put enormous strain on the city’s shrunken home care workforce. Events like this, akin to the Memphis (USA) sanitation strikes of 1968 which halted trash collections, remind us that human beings can only be exploited so far. These sudden stops are harmful and they are the direct result of responsible parties outsourcing their responsibilities to others.

Paradoxically, these cases of labour exploitation are under the backdrop of GDP per head in the UK, a broad measure of wealth, being the highest it has ever been in history. Unfortunately, rather than use our growing wealth to adequately address the “costs” associated with this growth, individual actors who are able to address them have widely let these costs spiral out of control into the dire situation we have today. (3) Former American diplomat Ivo Daalder well summarised the paradox of the West’s unprecedented economic growth in 2016:

“Within… global cities… a growing number of people have been left behind. And beyond these cities – out in other parts of the country – more people have lost out on the benefits produced by globalization and accelerating technological innovation. All too many people, in the past fifteen years, have seen their wages stagnate or even cut, their jobs lost, hopes dashed, and dreams deferred.” (4)

With hopes dashed and dreams deferred, we see a rise in people in the West adhering to movements which offer false dreams, which Rabbi Lord Sacks identifies as: “the far right, the far left, religious extremism and aggressive secularism.” (1)

Should we not be surprised that this culture of moral irresponsibility that poisons societies as a whole also poisons workplaces?

Indeed, former PR executive Robert Phillips notes that, “In any organisation, 80% of the workforce is dis-enfranchised and doesn’t care. 25% of the 80% would actively sabotage the organisation for which they work.” (5) If you’re a business leader of an organisation with employee disenchantment to that degree, do you think your organisation is sustainable? I think not. 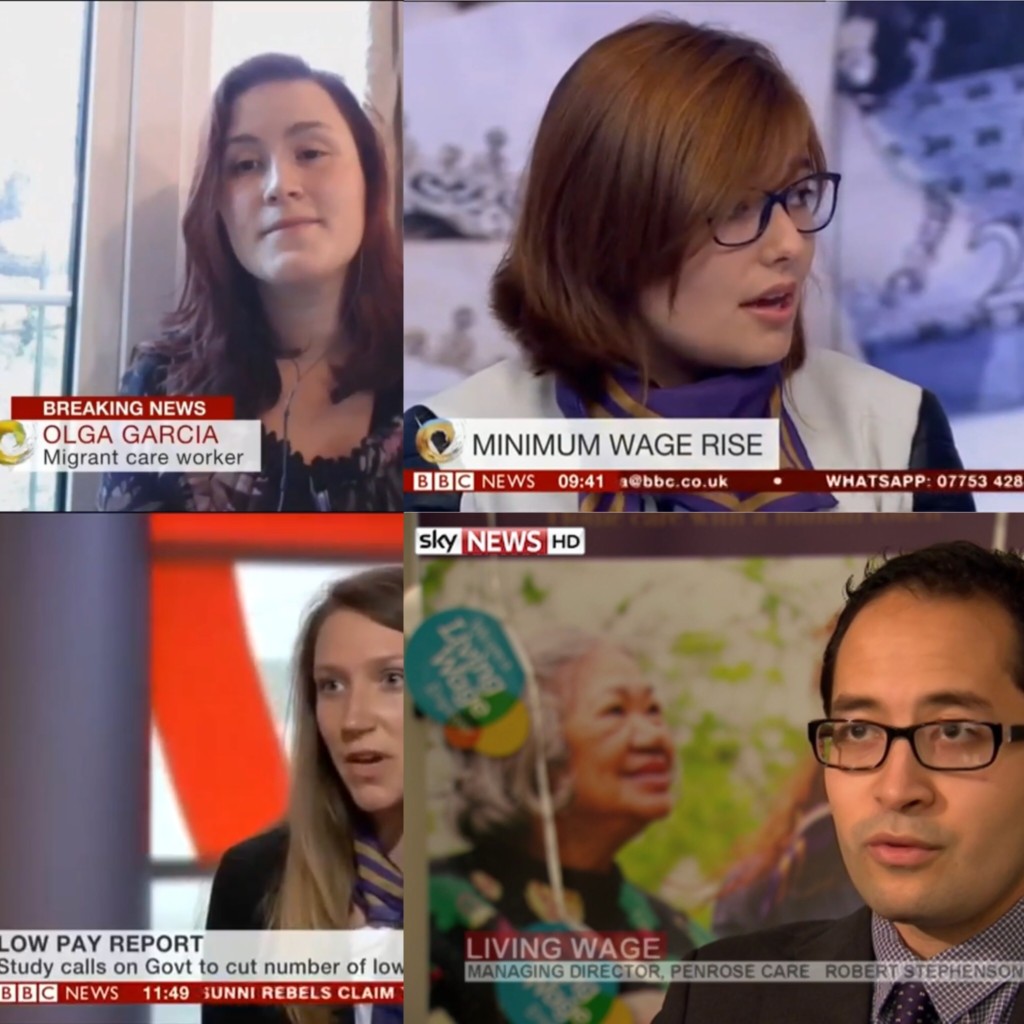 In contrast to many of its peers, Penrose Care has been a champion of ethical home care, which it has promoted through various channels, including the national British media.

When I first entered the corporate workforce in 2007, I discovered that the kind security staff, the indispensable cafeteria workers, and phenomenal cleaners I encountered in my workplace all worked for other firms although we all worked under the same “umbrella firm”. I thought at the time, that’s odd. I later learned that this was a common system of outsourcing whereby companies contract out essential internal corporate services, often to the lowest bidder.

If a decision-maker can seemingly outsource the moral responsibility of say, the exploitation of workers on their premises to boost the bottom line, then why not? What if your cleaners and security staff can only get by with third-party assistance, such as in-work benefits; or have to work a second job which means they seldom see their families? Behind the curtain of the contract holders, you may think these are the contract winners’ problems, or more likely, you just may be wholly unaware of the working conditions of these outsourced staff.

As the common reasoning goes: as the manager of the “umbrella firm”, I am responsible for my “employees”. Whereas, what happens to the others – the contractors – that is not my business and you think, not my responsibility. The actual accreditation process of being a real Living Wage Employer however recognises that IT IS your responsibility.

The Living Wage Foundation requires an Accredited Living Wage Employer to roll out the real living wage – £10.20/hour in London currently vs a minimum wage of £7.50/hour for those 25 of age and above – to certain outsourced staff such as cleaners, along with the organisation’s actual employees. 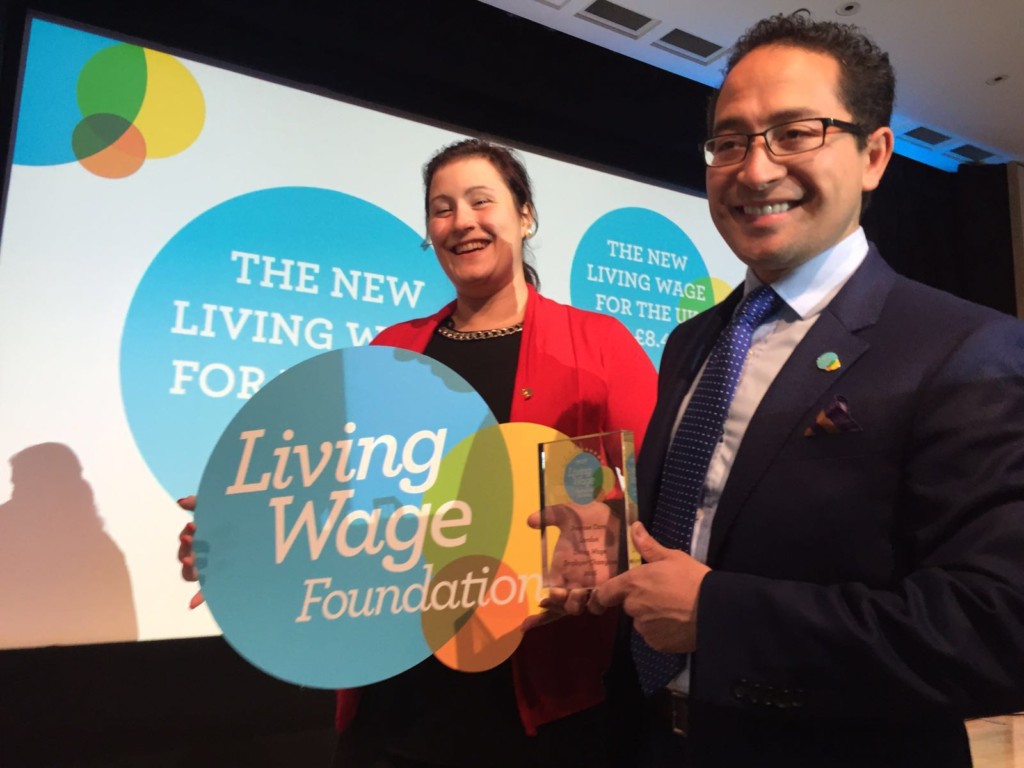 By making the courageous moral choice to pay your workers – employed and outsourced – a wage they can live decently from, you are implicitly recognising that all of your colleagues have dignity as human beings. As with finite lives, human beings’ sweat and time is sacred, and thus must be duly respected with fair compensation in return. The young Winston Churchill eloquently recognised this truth in the last century, “It is a serious national evil that any class of His Majesty’s subjects should receive less than a living wage in return for their utmost exertions.” (6)

Realistically, making a moral choice where the cost are high is difficult, hence the need for courage. It means you as a leader need to build and maintain an organisation that is voluntarily taking on a higher cost base than your peers and yet must still be viable and sustainable. For organisations that are not naturally high value-added – such as social care, cleaning, non-luxury retail, and certain manufacturers – and so struggle to afford paying the real Living Wage need a higher quality product/service and associated brand to allow them to charge sufficiently to maintain viability and sustainability.

This is where the Living Wage Foundation, and its celebratory awards such as the Living Wage Champion program, are key. By helping to publicise the good moral choice of your organisation to pay your workers the real Living Wage, the awards help you convey the message of goodness to the public, which will hopefully raise your brand awareness in prospective customers, helping to sustain your Living Wage commitment.

This has been a key recipe for success for my organisation, Penrose Care, which was one of the UK’s first Accredited Living Wage Employers. This view was further confirmed to me in December 2017 when I posed the question to Lee Phillips, finance director of Living Wage-pet food manufacturer Roger Skinner Ltd, “how can a manufacturer in an OECD country maintain ethical labour practices when its cost base is already higher than its international peers?” He told me, “The right ethics, right morals, and you need a brand [to credibly signal this quality]; and look after your customers.” 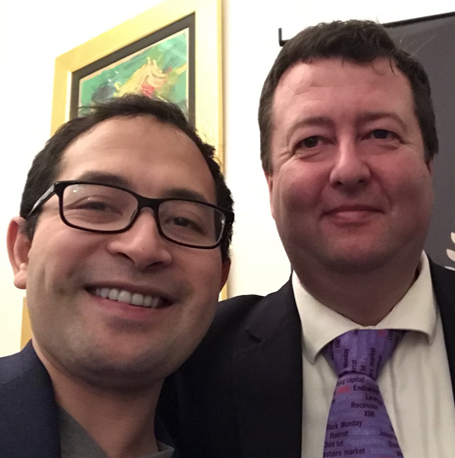 It must be highlighted that being a real Living Wage Employer means your product and service is higher quality. Since neuroscience tells us that good actions tend to release the “feel-good hormone” oxytocin, by adding an ethical component to the purchase of your goods and services for your customers, you have ipso facto boosted the quality of your offering. (7) It should therefore be no surprise that research has indicated that consumers are willing to pay a premium price for goods and services from Accredited Living Wage Employers. (8)

By working as partners with employers, the Living Wage movement builds up workplaces that adhere to moral responsibility, that promote togetherness, that have a common vision that all of us have innate dignity.

Do not underestimate the impact your decisions in the workplace can have on wider society. The great American labour leader Lane Kirkland once said, “history moves when civil society reaches a critical point. It is not decided in the foreign ministries or in the palaces of power but on the streets and in the work places.” (9) By doing a moral good in the workplace, you set a good example for your colleagues to also do good and by boosting their financial security, you reduce the fuel to some of the more macro-level evils we see in the world today. In a cynical world, the Living Wage employer stands as a visible sign that humans can be good. And together, we in the Living Wage movement will continue to make history, tilting it towards goodness and justice, remembering that “It is not hope that gives rise to action so much as action that gives rise to hope.” (10)

Robert Stephenson-Padron is the managing director of home care provider Penrose Care, the winner of the Living Wage Champion award in 2016 for the London region. Penrose Care has been an Accredited Living Wage Employer since 2012.

The foregoing article is the full version of a shorter article written for the web page of the Living Wage Foundation. 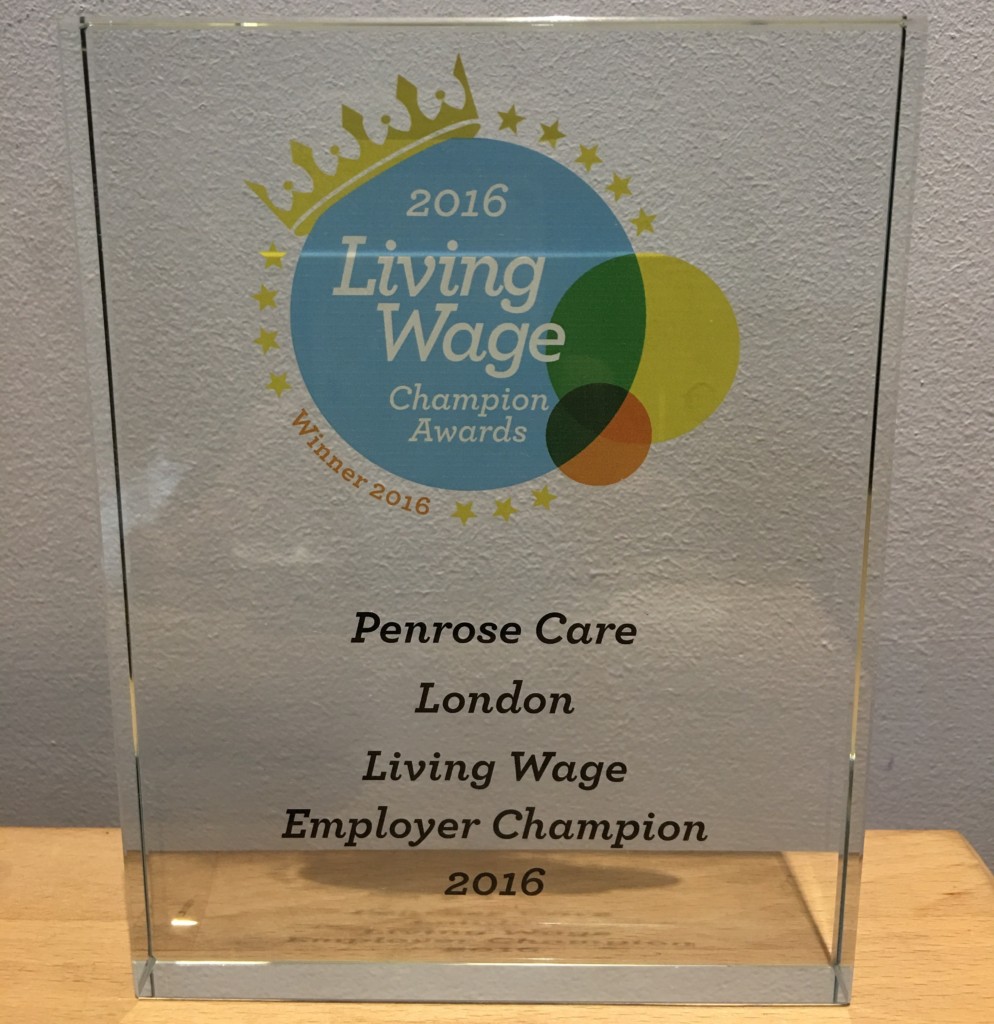 (6) Donald Hirsch, “How the old idea of the living wage has been embraced by the political establishment” (The Conversation: 6 June 2017), available online here.