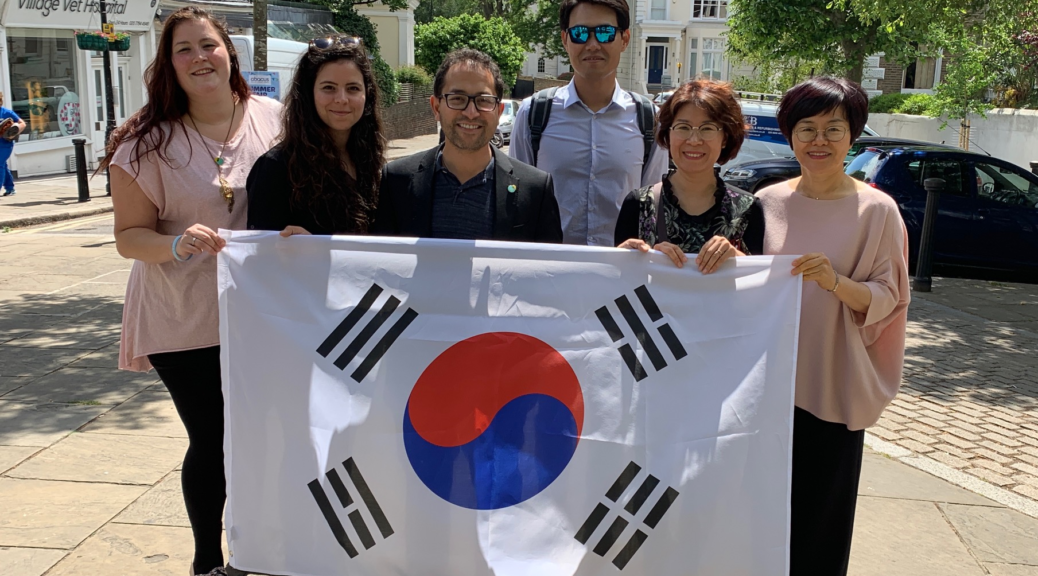 On the Penrose Care side, the research delegation was hosted by Penrose Care’s managers Robert Stephenson-Padron, Olga Garcia, Nikoletta Makouli, and Quita the Kitty, a trainee pet therapy cat.

The purpose of Ms. Seo and Ms. Park’s visit was to inform the development of dementia care in Gwangyang-si, South Korea.

Following the visit, the delegation made the following statement on June 16, 2019:

“We were very impressed with how much effort the carers from a private company put into improving the quality of life for patients. In particular we felt that Penrose Care was a thought leader in their belief that the staff had to be happy in order to be able to provide good quality care to patients” – Young-ok Seo and In-soon Park from Gwangyang-si, South Korea

“Penrose Care is honoured and humbled when it receives research delegations from abroad. It is a demonstration that respect for the dignity of the human person is a universal value stemming from the love we have for our parents and grandparents, and our siblings and our friends. I hope our commitment to the highest quality of care and its link to ethical labour standards continues to inspire policy makers and health and social care workers around the world. I send all my best wishes to our brothers and sisters in South Korea as they work to tackle their own challenges associated with ageing societies.”

Penrose Care is an ethical provider of home care services in London, United Kingdom to adults with disabilities such as acquired brain injury and elderly persons including those with dementia.  The company operates upon a fundamental belief that to promote a caring workforce, the organisation itself must be caring. As the pioneer of ethics in home care in the UK, Penrose Care in 2012 became one of the first four providers in the United Kingdom to become an Accredited Living Wage Employer and in 2013 the first independent sector provider to be compliant with Citizens UK’s landmark Social Care Charter. Penrose Care was named the Living Wage Champion for the London region in 2016 and for Industry Leadership in 2018 by the Living Wage Foundation. Penrose Care’s ethical social care framework has garnered international acclaim, resulting in Penrose Care receiving research delegations from Canada, China and Japan. Penrose Care is rated Outstanding by the Care Quality Commission, the highest rating given by England’s health and social care regulator.

Gwangyang is home to beautiful tourism resources including the famed Baegunsan Mountain and Seomjingang River. The city produces high quality farm products and promotes new growth industries based on the Port of Gwangyang and the Gwangyang Steel Plant. These make Gwangyang a city with outstanding business conditions and great development potential.

The city is dedicated to active, innovative public services so that Gwangyang will be a global city, a great city for nurturing children, the happiest city in Korea, and the number one city in the Jeonnam Province.